There is something great coming Tomorrow:

Operating Systems in our era are really optimized and have proved so great. But they haven't got all features we want. Just like Windows, Mac, Android, iOS and other linux based Operating Systems like Ubuntu.
They all are great but have some specific or not great features at all. Windows is famous for being Universal but there is a catch that we can't use Apps like we do in Android ecosystem. iOS and Mac OS are from Apple and they are not open source mean that they are limited to only the company's hardware like iPhones, iPads and Macbooks, Macs, respectively. Ubuntu and some linux based OS' have also some problems.
There was a project from Ex Google employees. They have been working on an x86 based Android OS which was specifically made for PC's and Laptops and i also posted that on my Blog that how to get those Android versions on your own PC/laptop.

Must See My Post Here to Install Android Lollipop:

Now people from Android x86 project joined hands with people from a company named Jide. Jide presented their Surface clone running Android OS in CES 2015 and they got a little bit of attention. Now in CES 2016 they came up with a fully optimized and working OS and they are going to release that OS on 12th January 2016 (Tommorrow). Android x86 has too much problems with the PC and apps layout. Apps are not fully optimized for use on PC and they have some problems running in landscape mode.
Now jide just changed the game with a partnership with Android x86 and made an OS called Remix OS.
The beauty about this operating system is that it's now fully optimized to run Android Apps and they have Windows 10 inspired User Interface. Quick features: 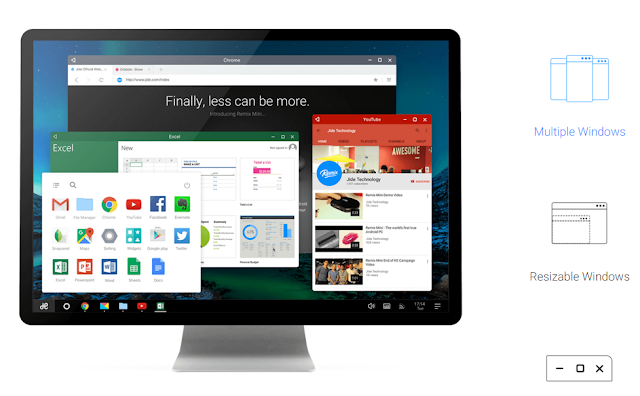 This is a game changer and it will change the way we use our PC's or Laptops in every way.

It runs all Android Apps and has Google Play Store

The OS can be dual booted with Windows and has great performance on PC's or Laptops with good specs. The OS is compatible with all x86 based Intel and AMD processors.
Company is going to release that OS on 16-January-2016
The company is promising performance.

Its Free
The OS is listed on the website for price of $0 which mean that it's coming for free.
This OS can be dual booted with Windows and Mac OS x(But only with some tricks for now. I will share that method here soon).
It can be installed on a USB too.

It is now will be available from 12-January-2016 to download for Free: Links Below: