A physicist fired a bullet on himself under Water [Watch Video]

Man shot a bullet on himself and see what happened:[Don't try this at home/anywhere]: 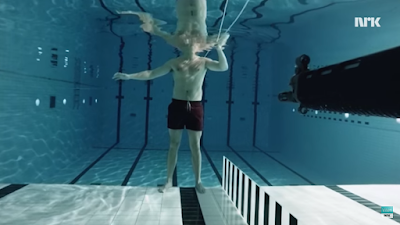 A physicist explained the difference between air and water resistance by shooting a bullet from a gun to himself and then shot himself but pulling the trigger through a rope and the results were amazing.
The bullet stopped in the half of the distance between man and the gun. He was looking terrified too when he was doing this thing. But you know scientists are the people that can do anything for the sake of science. He rejoiced and was happy about his experiment in the end.
This happened due to water resistance. Water absorbed the shock of the bullet and this made bullet to stop in the middle of the water instead of hitting the person standing in front of his death. The experiment proved that water can handle the bullets with care. But don't try this at home or anywhere because it can be dangerous for anyone else. He was a scientist and they took precautionary measures and calculations. After all those precautions and measures they did this experiment.

This was the warning written under the video:

Warning:The experiments shown in "Life on The Line" are conducted without any other safety than what appears in the videos. The experiments have been thoroughly tested in advance, in close consultation with professional personnel. To recreate or otherwise attempt to repeat the experiments can be fatal and is strongly discouraged.