Motorola made a smartphone that is supposed to have unbreakable display. Their Droid Turbo 2 is "Shatterproof" 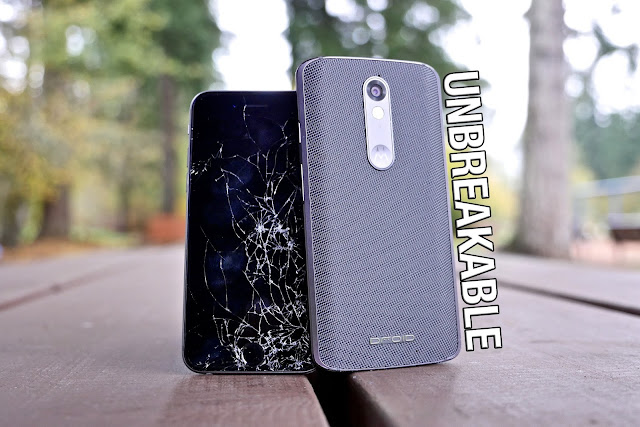 Recently Motorola claimed that they have made a display that is "Shatterproof". Which means that the display they made is unbreakable and it can bear a lot of force.
Unlike other Smartphones in the world which normally have Gorilla Glass and other tough displays. Motorola claimed that no other smartphone has a tough display like their new Moto Droid Turbo has.
To prove this they also made a video which is showing every latest and greatest smartphone including iPhone 6s and Samsung's Galaxy Note 5 and S6 Edge+ dropping down on a hard floor. All of them didn't survived. Then they dropped Moto Droid Turbo 2 and it survived magically on a tough floor.

This Motorola smartphone also has some great stuff instead of it's old design.  It is not waterproof but it has something more. The smartphone is "Water repellent" too.

What is Water repellent?

Well! water repellent is not like waterproof or water resistant. If a smartphone is waterproof it means that the smartphone is tightly packed that will not allow water to get into it. It should be sealed like a tight box. Just like we have seen Samsung Galaxy S5 and Sony Xperia Z series smartphones. But Water repellent mean that it will allow water in the smartphone but it has nano coating which makes the hardware repel water. Now see couple of videos which prove that Motorola Shatter Shield is really really tough.

This video is about Water repellent tech: