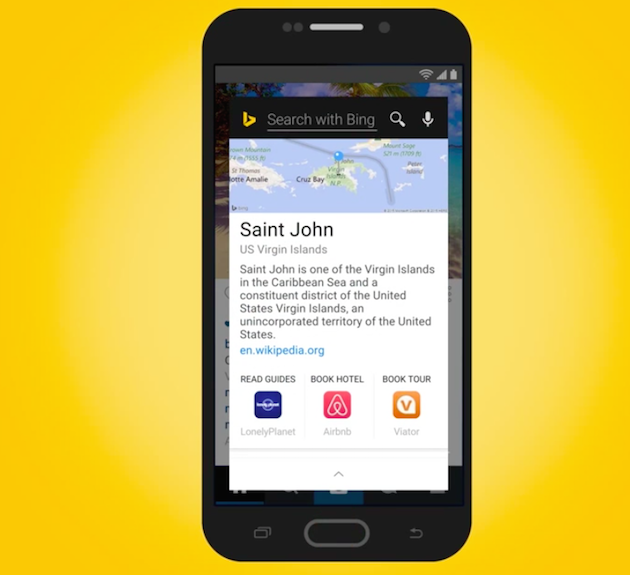 Google announced a unique and killer feature for its android M (Marshmallow 6.0) release.

But its too late now Microsoft just released the killer

Google Now feature early than Google so its here on Google Play. The app uses your accessibility setting to read your Android Smartphone screen and show you respective results so you don't need to search separately on Google or another search engine.

This is really a cool feature but it's still in beta version as Microsoft continuously improving its feature. Microsoft is in Android Apps games since it realised that it's better to focus on Mobile OS'. The app works great but it only search famous things just like if there is a sentence that is not famous unlike Google and  Microsoft then it will no search for those and will only show you Information about Google and Microsoft. I also posted some screen shots below so you can see. You should give it a try as i think it is a feature that Microsoft quickly copied from Google with its Google Now on Tap that is coming with Android Marshmallow 6.0. There are other cool features that Bing have is a bubble that constantly stay with us everywhere just like when we use facebook Messenger bubble pop ups. You can hold it and drag it down to close. Also just drag it to center of screen for Snapshot search.
Also See:

You can use menu key for Smartphones that doesn't have Soft or Virtual keys on their smartphones. You can use Soft keys to use it on soft keys phones like nexus and Motorola devices.

Also: Get Cortana for Android

Here are some Sample shots from Bing snapshot feature:


Get "Cortana for Android":